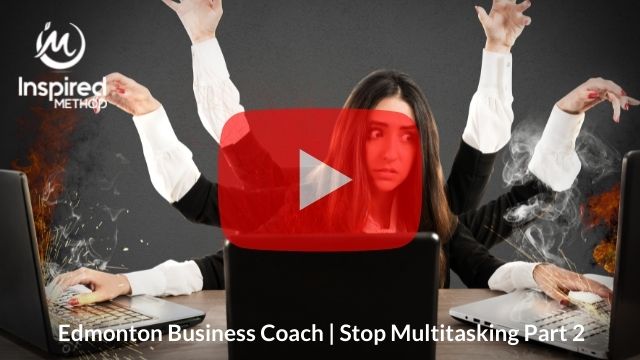 Studies show that middle aged men start the most successful businesses. I’d say that’s true. hub you in your, in your experience with helping business owners. I think that, you know, that age route probably has a little bit more, you know, success, right? I mean, there’s outliers, there’s the, the, the 18 year old who starts a brilliant business. And then there’s a 70 year old that starts a brilliant business. And that happens probably years more towards the middle of the spectrum.

Right. The 40 year old who has a bit of experience and yeah, and, and then goes on. Yeah. Awesome. I feel the same way because I’m a middle-aged guy, started a business and we’re doing alright. Edmonton business coach multitasking has been affirmed as a skill to be attained and those who do it are godlike productivity science suggests otherwise. Okay, so what are some of the questions that people have about multitasking? Why it’s horrible? Well, I mean, why do entrepreneurs think that they are effective multitaskers?

That would be the first, the first question first hurdle, first question. Well, you know, the the solopreneurs, those guys who are on their own, they’ve gotta wear many hats. So they’re doing the scheduling, the calling, the marketing, doing the work and trying to get it all done. And they feel at the end of their day that they’ve done and accomplished so much when at, at the end of the week, they look at, at their calendar and say, what did I actually do?

So I think that they, they think that they’re great at multitasking. But I like what Keller says, multitasking is just an opportunity to screw up many things at once, right? Yeah, I mean, the math is pretty clear. The math says that first of all, nobody is a great multitasker and it’s actually inversely related to the people who think they are superior. Multitaskers actually are worse.

No One Is Actually Good At It

And the people who think, no, I’m not really great at multitasking. They actually just have the awareness that all that multitasking is a joke anyway. So its kind of a, a silly relationship, but that’s the actual hard date and what it says on the subject. Right. So I’ll give this question. Do you think pilots or surgeons multitask while, while performing in their duties. It’s like the ultimate gotcha question. Right?

Like it’s like the minute, you know, an entrepreneur comes in and says, I’m a great multitasker and you ask S like, how would you feel if you’re the pilot of your plane is multitasking or, you know, you’re going in for surgery next month? How would you feel if the surgeon was going to multitask while they had you open on the table? Oh, I just kind of put this on my Twitter, or Edmonton business coach YouTube channel.

Yeah, we know intrinsically it’s bad at Edmonton business coach. But you know, we still do it probably because we think we don’t realize how much of a contact sport business is. Your competition is trying to crush you. And if you can keep them distracted the better, right? Yeah. The entrepreneur, you, the competitor, you’ve got to be scared of is the one who’s in a cave. Creating better systems and processes and has their full level of concentration.

Yeah, speaking of cave, the next question, how successful would we be in attempting to get Jim Tru living or Elon Musk on the phone? Yeah, I mean, there’s a little bit of, you know, the, the cell phone, you see someone busy on the movies and think it’s the Hollywood movies that the persons always on the phone or texting or tweeting stuff that somebody says Edmonton business coach.

But they’re really successful entrepreneurs that we see you can’t get them on the phone. You cannot distract them. And that’s by design. They got multiple layers of people. And it’s one of the first hacks where even, you know, early stage entrepreneurs. If we can get their phone going to a call center or an assistant or something, you know. It really just accelerates their growth right now, this one. Going back to that quote that we said before from Gary Keller. Saying that, multitasking is merely the opportunity to screw up more than one thing at a time here at Edmonton business coach.

Any Business Can Avoid Multitasking

What business is Gary Keller in? And why is that relevant to our topic today? This was a while, like it took me a while to understand like Gary Keller who wrote the book, the one thing which is, I think is one of the, the greatest reads on the subject of multitasking that’s a fact says Edmonton business coach. He was a real estate agent, you know? So he he’s in the business where you think the all ultimate level of distraction and task switching.

Even The Busiest People Can Stop Multitasking

People Who Thinks They Are Good Multitaskers Aren’t

Or are they more than likely just delusional? Yeah, yeah, that’s the surprising part of the data. The people think they’re good. Multitaskers are worse. The people who think they’re not very good multitaskers, they’re a little bit better at multitasking, but they’re still, I mean, they’re walking around with the intelligence or the fifth grader. They just have a little bit more awareness to know that multitasking just inherently is, you know, doesn’t work well, it’s not efficient. We avoid it at Edmonton business coach.

No One Is A Good Multitasker

Yeah, so, if you, if you believe that you’re a multitasker, you need to be cleansed from those that thought from those thinking, that you are, an efficient multitasker and getting stuff done. So the next question that people might have is why isn’t it a good idea to be looking at your inbox all day long? Well, I mean, it takes an average of, it takes up to 23 minutes to reach your peak level of intellectual performance after you’ve, you know, been distracted, single social media posts or a voicemail, a text message. For more help, contact your Edmonton business coach for a free one hour consultation. Continue on Edmonton Business Coach | Stop Multitasking Part 2.